We also worked in a group to nurture a seed and monitor how it grew. We recorded our findings in our seed diary.

Children really enjoyed the school visit to Enginuity. The focus of the afternoon was forces and mechanisms. Children investigated the main exhibits that related to the main focus. There was a fun interactive demonstration to develop an understanding of a variety of forces including gravitational attraction, friction, air resistance, lift and thrust. They then followed a design brief to make a buggy racer. Finally children got to race their vehicles to see which would go the furthest.

Children have been finding out about fractions and equal parts. They used Playdoh to make a circle then divided this into halves and quarters. They looked at the importance of an equal share when cutting up fruit into halves, quarters and thirds.

Children in Class 2 enjoyed dressing up as their favourite book character. During the day they enjoyed sharing stories with their peers, writing stories and illustrating cover designs.

We listened to the Story about the Snow Dragon and used this to write our own version including powerful verbs. Children created new endings, wrote persuasive letters and wrote predictions about what they thought could happen next in an extension of the story.

During P.E Children have been focusing on balance and controlled catching skills.

Children looked at pictures to sort into categories of living and non-living. We then discussed a new category of "were living" and what this could include. Children identified logs and wooden toys as part of the new category because they once were living but when the tree was chopped down it was no longer living. Children went into the outdoor area to look for signs of living things and found many things.

In science we made predictions about what may be the quickest way to melt ice and what materials would travel across ice the fastest. 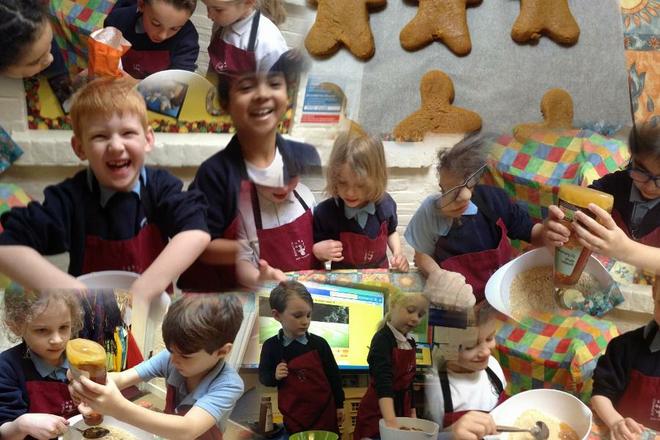 In Science we had crepe paper and were set the task to make a strong rope to enable it to hold some heavy weights. Children made predictions about what type of rope would hold the most weight, some of their ideas included a short rope, braided rope, knotted rope and a twisted rope. Once they made their rope they tested them for strength by putting in weights in a bag to see what happened and which type held the most.

We have been looking at the properties of 2D shapes. Children have built 2D shape pictures, identified properties and had a go at some shape problem solving.